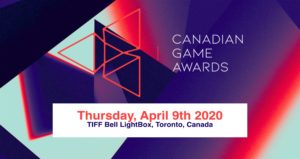 The Canadian Game Awards have been indefinitely postponed amid the ongoing COVID-19 pandemic, organizer Northern Arena has confirmed.

The inaugural event was announced in February as a traditional awards ceremony that fans and developers could attend, but moved to a digital-only show one month later. Now, it’s been pushed out of its April 9th broadcast date altogether.

Northern Arena says it’s planning to reschedule the broadcast — which was set to air on 24/7 esports channel Ginx Canada — “at the appropriate time” and will provide further details as they become available.

For now, the company says it’s looking into alternative ways to honour the winners. While the public, of course, doesn’t know these yet, the nominees were revealed earlier this month. The five games up for Game of the Year are:


The full list of nominees can be found here.


The post The Canadian Game Awards have been indefinitely postponed due to COVID-19 appeared first on MobileSyrup.