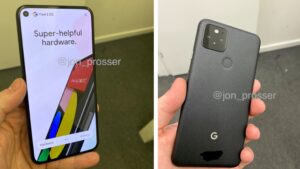 We’re only hours away from Google’s ‘Launch Night In’ event, but notable leaker Jon Prosser has posted new live images of the Pixel 5.

The images confirm several previous reports, such as the phone having a hole-punch camera in the font and a dual rear camera, along with a rear fingerprint scanner.

Previous leaks indicated the phone will sport a 6.0-inch flexible OLED display with a 2340 x 1080 pixel resolution, a 19.5:9 aspect ratio and a refresh rate that maxes out at 90Hz.

The handset reportedly utilizes a 4,080mAh battery with 18w fast charging support and reverse-wireless charging. It also features a Snapdragon 765G processor, 8GB of RAM and 128GB of internal storage as well as a 5G modem with support for sub-6Ghz (commonly called Sub-6), and Google’s Titan M security module.

The tech giant is also expected to announce the Pixel 4a 5G during the Launch Night In event, as well as new smart home devices including the Nest Audio speaker and the Chromecast with Google TV.

Google’s event starts at 2pm ET/ 11am PT, and here’s how you can follow along. Stay tuned to MobileSyrup for full coverage of the event.