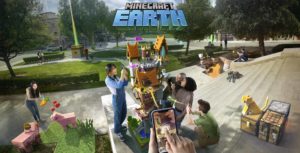 One of Microsoft’s most exciting game demos in recent years came during E3 2015 when the company showed off Minecraft being played in the real world through its HoloLens mixed reality headset.

The idea was that those wearing the headset could interact with a real world, life-sized version of the massively popular sandbox building game using their hands and voices.

While admittedly impressive, the demo wasn’t without its limitations — most notably, being tied to expensive HoloLens technology that is chiefly intended for enterprise use.


Fast forward nearly four years, however, and that vision for Minecraft in the real world can finally be made possible thanks to the ubiquity of mobile devices and Apple’s ARKit and Google’s ARCore AR platforms. Meanwhile, Minecraft itself has come a long way in its 10-year life span — a milestone Microsoft is celebrating this very month.

All of this is to say that now is an appropriate time for Microsoft to reintroduce Minecraft in augmented reality (AR) — not with a $4,000 CAD headset, but with a new free-to-play social Android and iOS game called Minecraft Earth.


Late last month, I was among a group of reporters who got to go hands-on with Earth at the Minecraft studio in Redmond, Washington. After an extensive demo opportunity and briefings by some of the game’s creators, it’s become quite apparent to me that Earth isn’t simply a Minecraft version of developer Niantic’s massively popular Pokémon Go, and is instead something decidedly more ambitious.

To be sure, Earth certainly has some similarities to Pokémon Go, which has, ostensibly, become the standard for location-based mobile games. Most notably, the two titles share the idea of the player walking around in the real world to move their avatar while the in-game map fills with content based on physical points of interest.

But it’s what you’re doing while exploring the world that makes all the difference. According to Minecraft Earth game director Torfi Olafsson, the pitch is quite simple: “Everywhere I look, I see Minecraft.”


There are a few things you’ll have to do before you can get there, though.

To start, you’ll need to create an in-game character and set forth to explore the world and collect resources. Primarily, you’ll be on the lookout for tappables, which are miscellaneous items like building blocks and weapons that are scattered throughout your mini-map. You’ll need to get closer to their locations in the real world and claim them by tapping their on-screen icons.

Unlike Pokémon Go, though, where you’re required to get right near a monster or location to interact with it, Minecraft Earth gives you a fairly generous radius in which you can collect tappables.

“We decided to have the world come to [players] rather than have them go to the world so that a younger person who doesn’t travel a lot will still get exposed to the game,” explains Olafsson. For example, he mentioned that the team doesn’t want desert-themed content to require players to actually travel to a desert or other places with sand. In theory, this seems like a fair compromise to make, especially considering Pokémon Go has often frustratingly locked certain Pokémon to specific regions in the world, limiting who can actually obtain them.

Outside of tappables, Earth‘s game world is also filled with procedurally-generated mini “adventures” that you can dive into for further rewards. Using OpenStreetMap, Earth will pick real-world locations that are best-suited for gameplay, not unlike how Pokéstops and Gyms work in Pokémon Go. While some of these adventures can be as simple as picking flowers or mining for blocks, others can feature deadly mobs — what non-player characters are referred to in Minecraft.

One of the adventures we got to try out had us fighting off skeleton mobs using bows and arrows while trying to mine a cellar for resources. Surprisingly, there’s a nice risk/reward element to these sorts of encounters. While they offer up many more rewards than you would snag from a tappable, you can also miss out on claiming them if you die in battle. 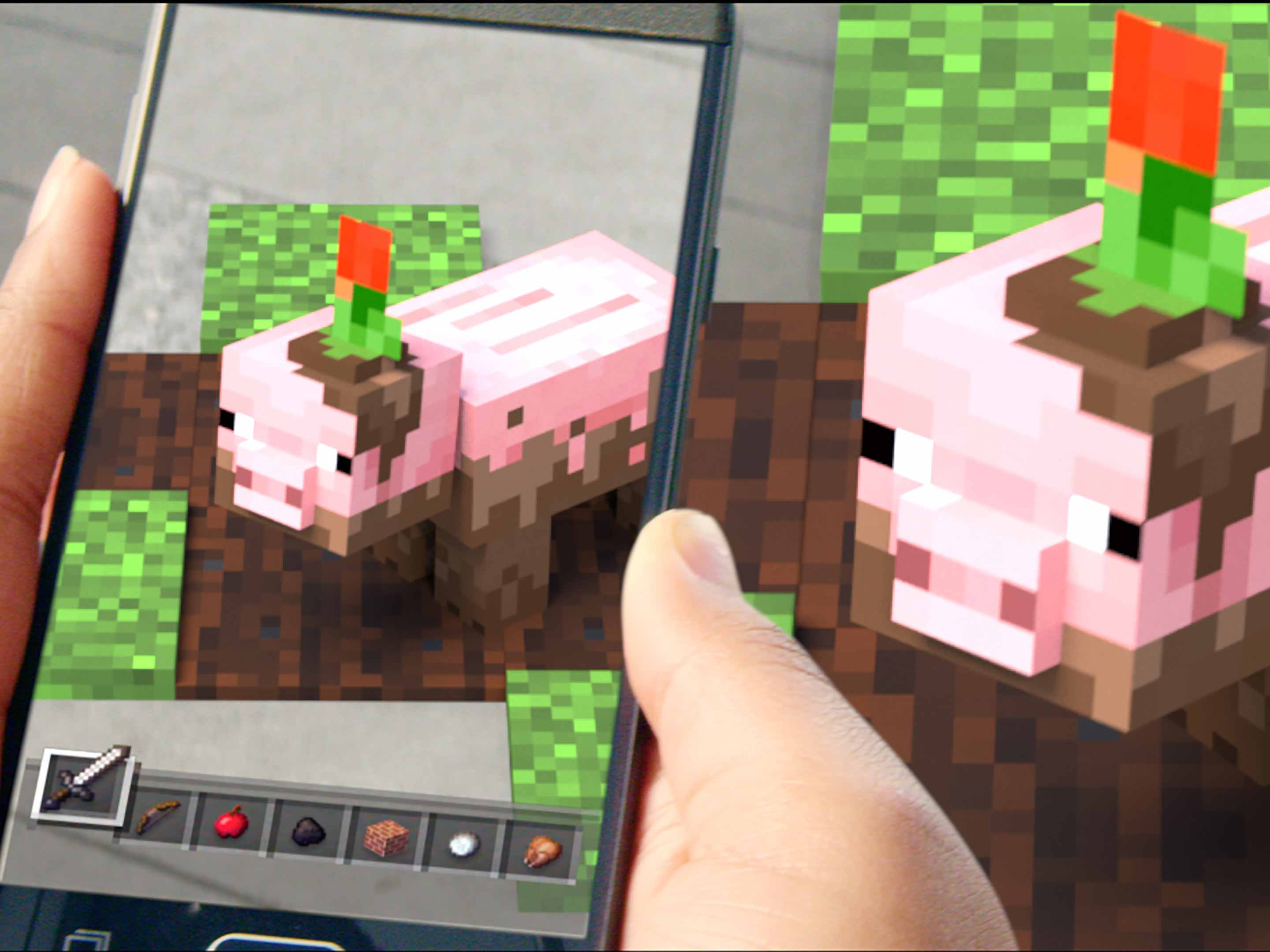 On the flip side, this is one of several areas in which the game promotes playing with other people. More than one person can join an adventure and help fulfill an objective, reducing the level of danger. Further, each player will be rewarded for completing the adventure, which Olafsson jokingly refers to as Earth‘s “communism feature.” All the while, you’ll receive experience points for completing adventures and other tasks, which will grant you new abilities and items as you level up.

All the while, the developers hope that these experiences will result in creations feeling more special.

“Every item has provenance. I know this sheep was gathered from somewhere. There wasn’t just some ‘sheep lord’ that dropped it into the world — I had to go get it. When you see a build I made, you know I had to go out and work hard to make that happen,” says Minecraft engineering architect Jason Cahill.

Building for everyone, everywhere


It’s a testament to the breadth of content in Minecraft Earth that I haven’t yet gotten to the actual building experience, which is easily the most important part of the whole game.

While my demo was rather guided and I didn’t get to try out full, unrestricted creation, I was nonetheless impressed with the tools I was given. In the game’s ‘Tabletop Mode,’ you can tinker around with all sorts of Minecraft creational assets, such as standard blocks, candles, pigs, trees, fences and sheep. For the purposes of Tabletop Mode, your creations are shrunken down to ensure they’re more manageable to edit. All of this is done on a ‘build plate,’ which can be saved and shared with others once completed.

However, you can switch over to ‘Play Mode’ at any time to try out your creation in full-sized AR. Here, other players can jump in as well to play around with what you’ve built. Nothing is saved in this mode so you and your friends can feel free to be as chaotic as you’d like here.

In the demo, collaborative building — even with people I’d never met before — proved to be rather fun. Despite the fact that I’m not one to typically mess around with user-generated content in games, I appreciated watching other people drop, move, break and set fire to things, which I suspect families would particularly enjoy with their kids even if they don’t game themselves. 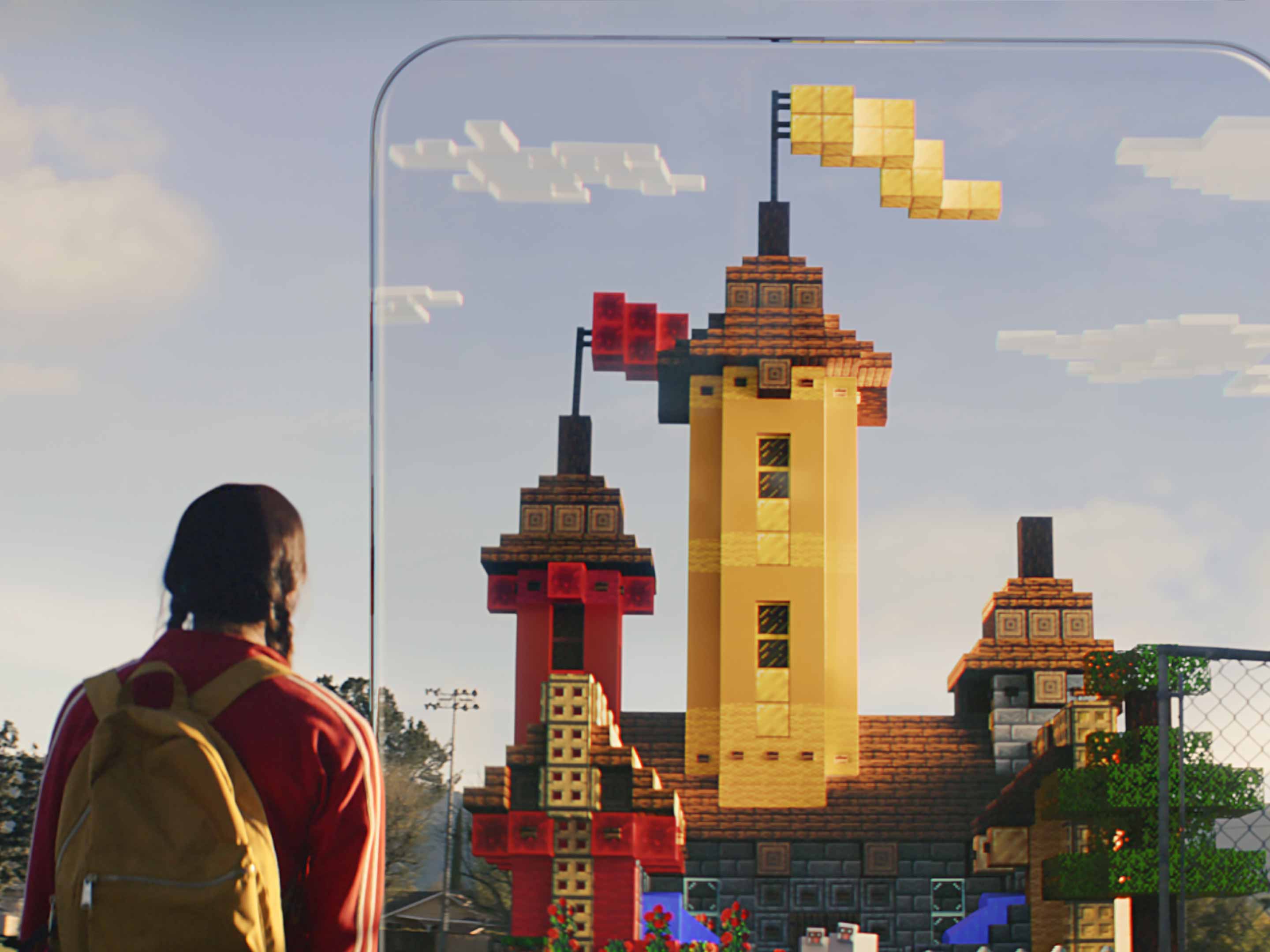 For Minecraft creative director Saxs Persson, this is exactly what the team was going for.

“I want, at a base level, for people to just be able to pull out their phone and see what other people have made in a magical way,” says Persson. “Our job is to make a good enough platform that people can have moments in the game where they say ‘Oh, I didn’t know that was possible, but that looks incredible.'”

These detailed, life-sized builds are made possible in no small part due to Microsoft’s extensive network of Azure cloud computing technology, which helps power the whole experience. This tech is impressive since these aren’t just little Pokémon staying in one place — these are oftentimes complex, dynamic constructions that are constantly evolving right in front of you.

“We believe building in AR, when done properly, is a very natural, intuitive way to create,” says Olafsson. “And it’s super fun to be in a session with you and a couple of your friends, the build plate is crawling with animals, things are on fire, there’s water everywhere and somebody’s building a redstone machine. For me, it’s like a childhood fantasy come true. It’s like the toys are living on your table right in front of you.”

In many ways, this is a wonderful realization of that initial HoloLens demo way back in 2015.


Having said that, my only major concern surrounding the gameplay of Earth stems from the fact that bigger creations or adventures may sometimes prove to be too much to handle — not necessarily for the technology, but for the players. When we did that skeleton adventure I mentioned earlier, it became increasingly more chaotic as more players from our group joined in. 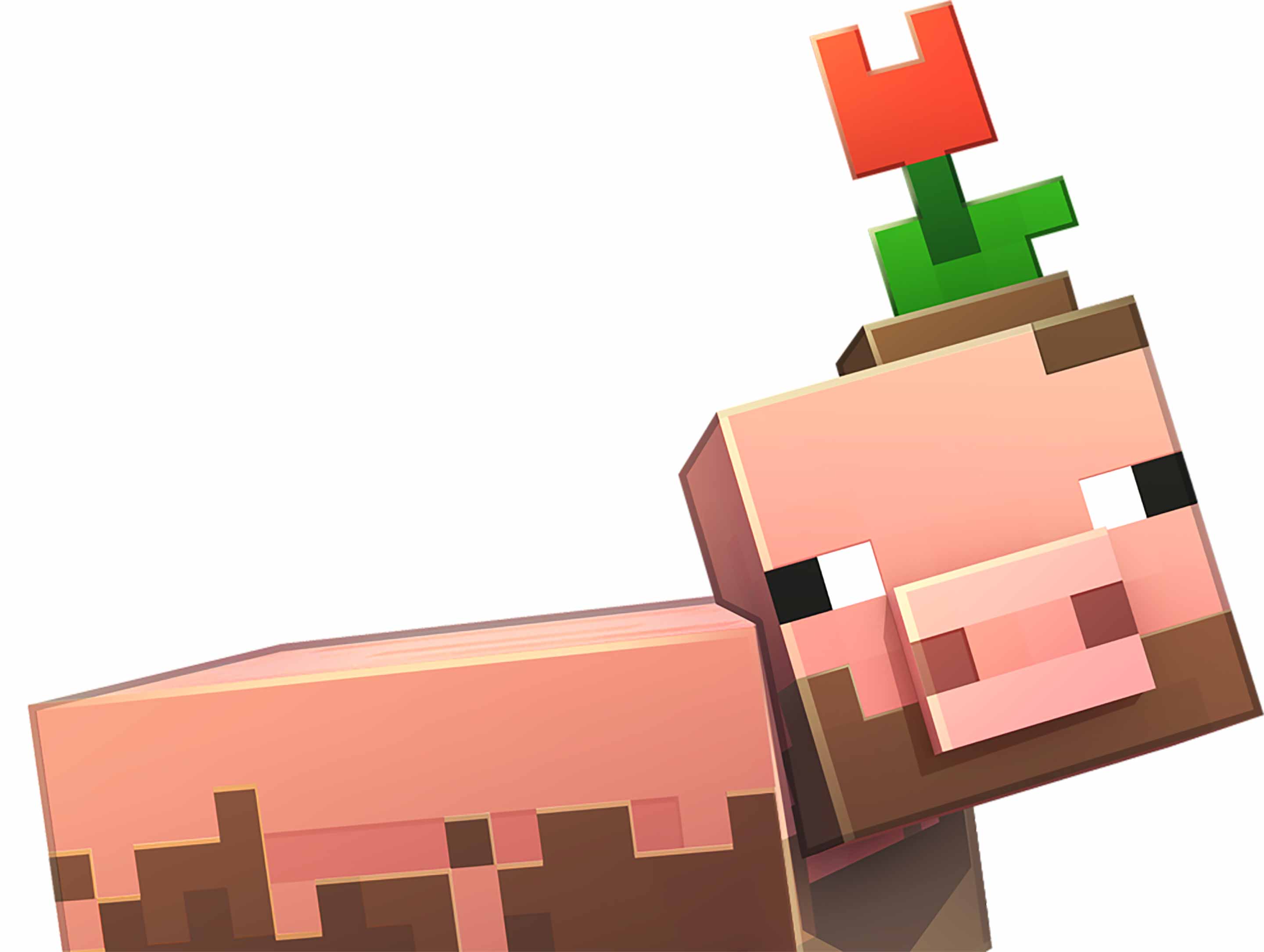 Once we got to a party of around 10 people, the area felt a tad overstuffed. People firing arrows in every direction, dropping blocks all over the ground and the arrival of enemy skeletons quickly swarmed my phone screen and made it rather challenging to keep track of what was going on. I felt this way even without any actual user-created builds in the area. Perhaps this is something that will just need a bit of getting used to, but initially, it can be a little jarring.

Meanwhile, Microsoft didn’t detail exactly how monetization will work, so it remains to be seen how balanced the distribution of resources will be when in-game purchases are factored in. Further, while the team promises to roll out post-launch updates and new content, it’s too early to say how strong this support will be. Hopefully, Earth doesn’t end up in a Pokémon Go-esque situation, where Niantic came under fire from fans for taking many months to add highly-requested features like player vs. player battles.

Regardless of how well Earth ends up being supported, though, the game does have the unique benefit of allowing users to keep it going with their own content. Given that the Minecraft community has proven to be a particularly inventive bunch, it will be interesting to see what people do with the game, especially as time goes on.

Minecraft Earth is an astonishingly ambitious game that presents a lot of opportunities for unique and engaging experiences, and after my time with it, I’m eager to see more.


Currently, the game is slated for release on both Android and iOS sometime in 2019, although Microsoft wouldn’t confirm specific launch markets. Given the company’s mantra of “gaming for everyone,” it’s likely Earth will come to Canada, although whether that would be part of the initial release window or in a subsequent rollout remains unclear.

For now, Microsoft plans to hold closed betas in the summer. The company hasn’t yet revealed specific timing and availability for the beta, but players can sign up on here for a chance to be selected as testers. A free Earth-themed skin will also be given to testers that can be used in the ‘Bedrock’ edition of Minecraft on most platforms.