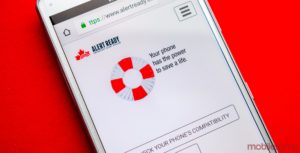 Unfortunately, a small but vocal group of individuals seem to be annoyed by the noise and timing of these potentially life-saving alerts.

In 2017, the Canadian Radio-television and Telecommunications Commission (CRTC) mandated all wireless carriers to provide text messages to mobile devices that notify Canadians of imminent threats such as fires, tornadoes, floods and missing children (Amber Alerts).

Carriers are legally required to support the transmission of these alerts through their networks since April 6th, 2018.

Earlier this week and back in February, Amber Alerts were issued by 911 operators asking the public for assistance in locating two missing children. On both occasions, the alert was sent early morning and revealed the worst in some people across Canada. Many were upset, startled and frustrated that they were woken up. The larger picture was that a missing child needed to be found.

Alert Ready, which is operated by Pelmorex and the CRTC, does not allow Canadians to opt-out of the service.

Some Canadians urged for an option to have a two-tier model of alerts similar to the United States’ alert system. However, a video created by Stewart Reynolds, known as @Brittlestar on Twitter, has cleverly outlined the importance of receiving Amber Alerts.

Amber Alerts work. Get over it. pic.twitter.com/AiVf7iH3hE

How do you think the Canadian Amber Alert system could be improved, or do you think it operates fine the way it is?


The post Here’s a good viewpoint on the importance of receiving Amber Alerts appeared first on MobileSyrup.