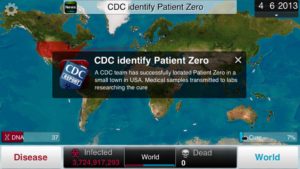 Disease strategy game Plague Inc. has seen a surge in popularity in recent weeks. Now, creator Ndemic Creations says it’s developing an update for the eight-year-old game that lets players fight the spread of a virus instead.

With so many people practicing social distance, isolating themselves and working remotely during the COVID-19 outbreak, there’s been an unsurprising surge in people looking for ways to entertain themselves. Interestingly, many of those people are turning to media about pandemics. Whether that’s streaming Contagion on Netflix or playing Plague Inc., pandemic-based entertainment is popular right now.

Typically, Plague Inc. tasks players with creating a disease and mutating it to infect and kill all of humanity. However, Ndemic says it’s “accelerating work” on an update for the game that will let people fight an outbreak instead. Further, the creator said that while organizing a $250,000 USD donation to Coalition of Epidemic Preparedness Innovations (CEPI) and the World Health Organization (WHO), the company was repeatedly asked to create a game where players fight a pandemic. Plague Inc. players will soon receive in-game prompts to support these organizations with their own donations.

When the update arrives, players will have to manage disease progression, boost healthcare systems and control real-world actions like triaging, quarantining, social distancing and the closure of public services.

Additionally, Ndemic says it’s working with the WHO and the Global Outbreak Alert and Response Network while developing the new mode.


The post ‘Plague Inc’ game to get new mode where players fight a pandemic appeared first on MobileSyrup.